Living positively for 20 years with a safe family 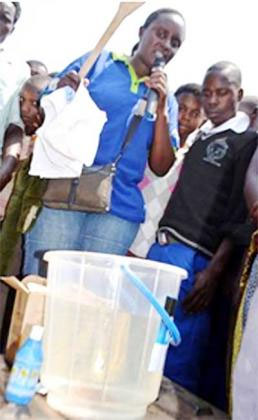 An SFH Social Marketing Implementer demonstrates to Bugesera residents how to use Sur’Eau. Bugesera district in Eastern Province faces acute shortage of safer water. Most residents fetch water for domestic use from Nyabarongo River, the water stream that snail through the highly populous and industrious City of Kigali.

Musabyimana Jean, 39, a mother of two children, resides at Nyarugenge Sector. Together with her neighbors, Jean says water is not only scarce but treating it is also expensive and time consuming.

Every day, she treks more than three kilometers to fetch water. In this dry season, it is even worse because some nearby wells dried up. Residents seem accustomed to this kind of life. Every morning, mothers, girls and boys line up, walking by the roadside carrying empty jerrycans to fetch water. Water from wells and streams, too, has dwindled in this ongoing dry season. Besides, it is so unsafe because it is the same water of Nyabarongo that feeds those wells and streams.

Sur’Eau, a sodium hypochlorite solution (dilute bleach) that disinfects water making it safe for human consumption, is a product distributed by SFH that has greatly helped improve access to clean water and helped in the fight against waterborne diseases.

It is a tried-and-tested innovation that beneficiaries have found to be effective in improving hygiene and health.

Sur’Eau, a water disinfectant, prevents against diseases such as diarrhea, typhoid and worms, among families.

Sur’Eau is significantly contributing to the reduction of waterborne diseases among other strategies in place. SFH has made this product available in various outlets across Bugesera District. Much as it is contributing to good health, this product saves money, time, energy and the environment since one doesn’t need to boil the water.

“I use Sur’Eau in my home. My children used to suffer diarrhea. I could visit the hospital at least four times a month because of waterborne diseases. But now we are safe,” said Musabyimana

Evariste Uwemeyinkiko, 46, a resident of Ngeruka Sector, and a father of four, also uses Sur’Eau. He said his family is safe of waterborne diseases.

Nsenga Jean Pierre, the programme manager at SFH Rwanda, said this year the set targets of distributing Sur’Eau and Pure across the country through community-based organisations (CBOs) have been surpassed—an average of above 120 per cent of all the products.

This comes with the intervention of Ministry of Health, which obliged SFH to intervene in Western Province, mainly in Nyamasheke and Rusizi districts.

In the near future, SFH will release the new product of water purification called P&G.

“We are in a process of releasing another product which mainly will help in water purification,” confirmed Nsenga.

The percentage of the population with access to clean water was 74 per cent in 2010 and 55 per cent used improved and not shared latrines. These and many more are impressive indicators compared to elsewhere in the region, thanks to government and development partners.